“Physical fitness is the first requisite of happiness. In order to achieve happiness, it is imperative to gain mastery of your body.” Joseph H Pilates

The Pilates method originated with one extraordinary man, Joseph Pilates. Born in Germany in 1880, he overcame childhood diseases including asthma and rickets to become a gymnast, skier, boxer, circus performer and self-defence instructor.

Pilates moved to England and during WW1 he was interred as a German National. During this time he began teaching his fellow internees, beginning the development of what would later become his method of ‘Contrology’. Later during the war, whilst working in a hospital, he was working with patients who had difficulty walking and realised that by attaching springs to their beds, they could strengthen their muscles whilst bed bound. His innovative approach went on to be made into the ‘Cadillac’ one of his pieces of Pilates equipment that is still used today.

Pilates moved to America in the 1920s and opened his first studio in 1926 with his wife Clara, who was integral to the teaching and development of the method. The studio contained much of the equipment that is still widely used in Pilates studios all over the world. Dancers and actors of the day came to the studio for rehabilitation or to improve dance technique.

Pilates called his method ‘Contrology’ but this became known as ‘Pilates’ after he died in 1967 in his 80s. The method was continued by teachers who had been pupils of Pilates and was, in turn passed on by them, evolving and developing as it was spread around the world. Although many people teach and practice internationally, most remain true to the original exercises and principles of Joseph Pilates, a true visionary of the 20th Century. 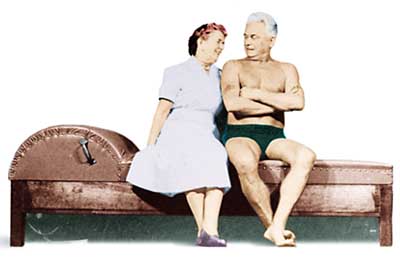 Joseph Pilates and his wife, Clara

Pilates Sanctuary is a bespoke studio for those wanting to strengthen and rebalance their bodies in a friendly and nurturing environment. Small groups, personally managed to ensure clients get the optimum benefits of the Pilates equipment.

From a typically sceptical overweight 50 something male, I’ve become a real convert to Pilates. Weekly sessions have been invaluable to me in rebuilding my balance, mobility and strength. A form of vasculitis had left me with very restricted use of my lower limbs, my wrists and hands. Alice had a very good understanding of my condition from the start, and has gone to a lot of trouble to research it further. Recently, with Alice’s help and enc… END_OF_DOCUMENT_TOKEN_TO_BE_REPLACED

Weekly pilates classes at Pilates Sanctuary were invaluable in keeping me strong and pain free during my pregnancy. The exercises and equipment I used were adapted each week as my pregnancy progressed. I felt very safe exercising and attended classes until I was 39 weeks, as my body always felt so much better after a session. I attended the post-natal classes which were brilliant and really helped loosen me up and introduce me to exercise again a… END_OF_DOCUMENT_TOKEN_TO_BE_REPLACED

I have worked with Alice and Agur for more than four years, before, during and after my pregnancy. At every stage they have been absolutely fantastic, I couldn’t recommend Pilates Sanctuary more highly. Particularly impressive is how well Alice and Agur tailor each session to my individual needs on the day. I always leave feeling great!

I have many patients who benefit from the excellent remedial and sport specific training that is provided by The Pilates Sanctuary. We have worked closely to develop the best service for our shared clients, and have achieved some amazing results. I have total trust and confidence in referring my patients to these talented professionals. The Pilates Sanctuary have also developed sports specific and post natal training classes which are invaluable … END_OF_DOCUMENT_TOKEN_TO_BE_REPLACED

I started at Pilates Sanctuary a year ago, when it was suggested by my physiotherapist that is would help me with my prolapsed L5 disc. At the time I was in a lot of pain and discomfort, my balance and alignment was all off. It was looking like I was a case for surgery. Several months on I am pain free the prolapse has reduced and I am continuing to improve with each class. For me the 1 to 1 classes gave me the best results. Agur is a fantastic t… END_OF_DOCUMENT_TOKEN_TO_BE_REPLACED

Moving to London, we spent over 2 years searching for a Pilates practice we felt happy to commit to. At Pilates Sanctuary, the teaching is so professional, that one feels guided and supported through each session, giving you the sense of an individual lesson. Having passed middle-age and being aware that this is an important time, where strengthening the body from ones core, is vital for our health and wellbeing, we certainly feel the benefits ev… END_OF_DOCUMENT_TOKEN_TO_BE_REPLACED

The Pilates Sanctuary is both an oasis of calm and a place where you can work your muscles as hard as they need. Agur has been my regular teacher for over a year, and the results are brilliant. An ongoing shoulder weakness that physiotherapists had given up on has, with regular work, almost returned to normal. The standard of teaching is very high, and you know you are in excellent hands. The team are truly body aware, they really know their anat… END_OF_DOCUMENT_TOKEN_TO_BE_REPLACED

We have been going to the Pilates Sanctuary for two years and are both thrilled with the results. We love our sessions with Alice and Agur, who have helped us achieve a better overall level of fitness, improved posture and an appreciation of how our bodies move. Ian can attribute a tremendous relief in chronic back pain to his Pilates sessions.

I started doing post-natal Pilates 4 years ago, shortly after the birth of my child. The purpose was to deal with chronic back pain and to build up my strength. I was enjoying it so much, that I switched to Studio Pilates three years ago. My body feels much stronger and looks much better than it ever did. I always look forward to my classes and feel energised and happy afterwards.

This website uses cookies to improve your experience while you navigate through the website. Out of these, the cookies that are categorized as necessary are stored on your browser as they are essential for the working of basic functionalities of the website. We also use third-party cookies that help us analyze and understand how you use this website. These cookies will be stored in your browser only with your consent. You also have the option to opt-out of these cookies. But opting out of some of these cookies may affect your browsing experience.
Necessary Always Enabled
Necessary cookies are absolutely essential for the website to function properly. This category only includes cookies that ensures basic functionalities and security features of the website. These cookies do not store any personal information.
Non-necessary
Any cookies that may not be particularly necessary for the website to function and is used specifically to collect user personal data via analytics, ads, other embedded contents are termed as non-necessary cookies. It is mandatory to procure user consent prior to running these cookies on your website.
SAVE & ACCEPT